Home Tips This Plant Could Ruin Your Summer. Be Careful!

Wild parsnip is another one of those invasive plant species that was brought to the Americas
and was likely introduced as a plant to be used for food, or some decorative purpose. It’s
pretty to look at, but beware…to touch is to get burned!

🔴 Wild parsnip sap contains psoralens which are naturally occurring phytochemicals grouped in a family of organic compounds known as linear furanocoumarins. Psoralens kill epithelial skin cells by inserting themselves into the DNA in the cell’s nucleus. These cells are responsible for protecting us from long-wave ultraviolet radiation (LWUVR) that bombards us from the sun. 🟡 Severe blistering occurs when skin affected by the psoralens is exposed to LWUVR. The synergistic effect is called phytophotodermatitis and the burn-like symptoms, as well as skin discoloration, may last for several months. However, connecting skin blistering to exposure to wild parsnip sap can be a challenge. The cause and effect are muddled by time because symptoms do not appear for around 24 hours after exposure to LWUVR and severe blistering doesn’t peak for another 48 to 72 hours.

The rash will usually clear up without treatment if you avoid contact with the plant that caused it. Treatment options include:

◼ Wash the affected area and cover rash with cool, wet cloth or bandage to reduce swelling.
◼ Steroid creams can be used sparingly (see your doctor or pharmacist) if the rash is severe.
◼ Protect the affected area from sunlight with clothing, gloves and footwear. 🟢 Tips to avoid exposure include wearing gloves, long pants and long-sleeved shirts. Planning
activities for the early evening will minimize sunlight and thus activation of the blistering
process. If exposed to the plant juice, wash the contaminated areas thoroughly as soon as
possible. 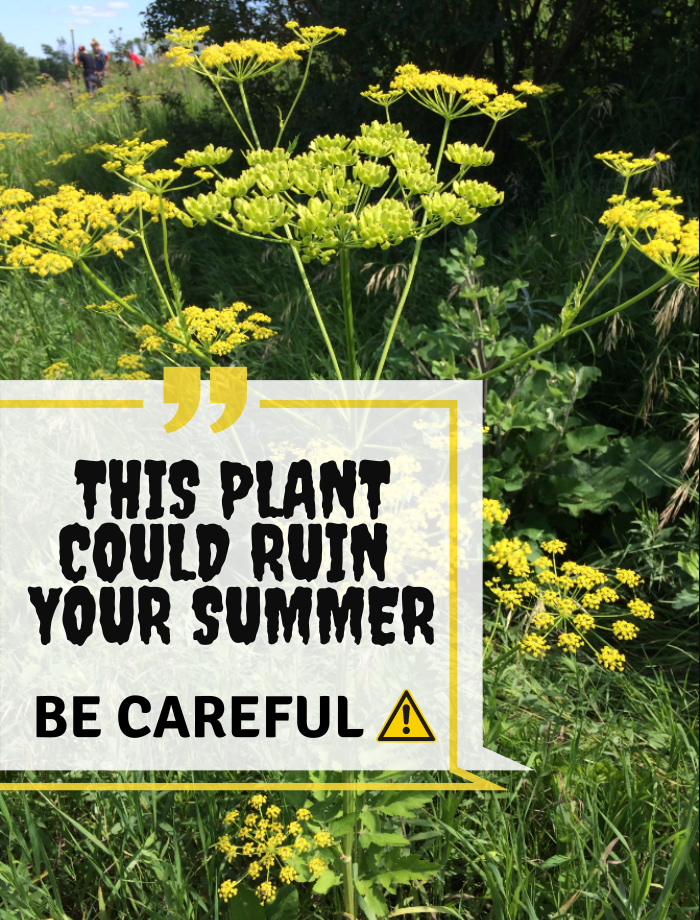 The Do’s and Don’ts of Feeding Birds

How to Make Hand Sanitizer

5 Cleaning Methods To Remove Grease And Grime From Oven Racks